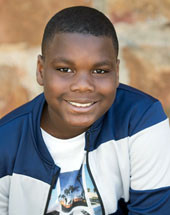 Antonio was born May 2010. Antonio has begun to mature into young adulthood, and he gets many compliments on his behavior and maturity. He loves playing basketball, and he enjoys playing cards, as well. Antonio is really good at cards, working on his computer, and playing with toy cars and trucks. He loves to draw. He is a very quiet child, however, once he becomes comfortable around new people he becomes more talkative and social. Antonio has demonstrated having a very protective demeanor for those he loves. Germaine, born May 2006, has a very likable personality. He always mentions that he would like to become a preacher. Germaine loves to pray, and he is often called to do so within his facility. He has demonstrated some very strong leadership skills, as his peers seek him out and gravitate to him. Germaine loves music and playing with his MP3 player. He also loves playing cards and football. Martez, born October 2013, is extremely active. He loves to play with toy cars and trucks. Martez loves to watch cartoons and love to get the various action figure characters from TV to play with. He enjoys attending daycare and looks forward to being with his school friends. He has overcome a developmental speech problem and can now speak clearly and is reading and counting. It appears that Martez enjoys being a part of a family unit and he thrives with a balanced environment. He also loves playing with electronic items, especially cell phones. These boys deserve a forever family who is active, patient, and understanding. They deserve a family who will love, support, and guide them to become the awesome young men they are destined to be.
Advertisements
Host: www2