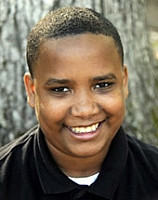 Jakaryus, born January 2004, is the oldest of six siblings, and they are very close. He is being adopted separately, but he'd like to continue the relationship with his siblings post-adoption. He has an easy-going personality. He loves attention from adults. Jakaryus enjoys helping around the house, and does not complain about completing his chores. His favorite activities include playing sports, particularly basketball, football, and running track. Jakaryus reports he also likes to write poems and he likes to cook, ride his bicycle, skate, and play video games. His favorite foods include macaroni & cheese, fried chicken, lima beans, pizza, waffles, and pancakes. Jakaryus gets along well with others, but doesn't enjoy being alone. He likes to go to church and he reads his Bible consistently. He is able to quote scripture that he has learned. Jakaryus finds enjoyment in being around people who make him laugh. When he grows up, Jakaryus wants to become an engineer or architect because he enjoys designing and building. Jakaryus would do best in a forever home with experienced forever parent/s who can provide structure and stability, and love and support that he needs to become the successful, contributing adult he is destined to be. Photograph courtesy of www.heartgalleryalabama.com
Advertisements
Host: www1