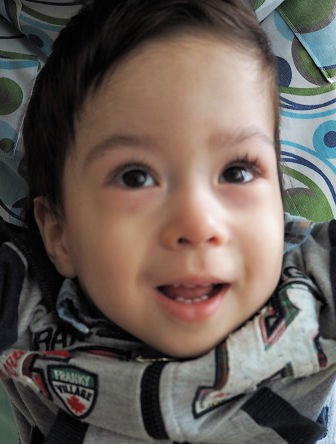 Fifer was born in August 2017 and has been diagnosed with spina bifida, internal hydrocephalus (shunt placed), and lower limb paresis. Having been born prematurely, he required pulmonary therapy at the hospital and has since been diagnosed with allergic bronchial asthma for which he takes medication. Fifer was also prescribed pharmacological intervention for suspected Jacksonian seizures, but no seizure activity has been observed since. This sweet boy has spent a substantial portion of his short life in the hospital and consequently has significantly delayed development, depending on help from his caretakers for all daily living tasks. Fifer is a calm and interactive little boy. He enjoys the company of adults and children and engages in play. Fifer reacts to visual and auditory stimuli, reaches for toys, and can sit with support. He can roll from his back to his belly and raise his head. Fifer speaks in simple sentences with proper pronunciation and articulation. He seeks attention from others by smiling, making eye contact, and reaching out his arms. Fifer loves to be held and have someone sing to him
Advertisements
Host: www1