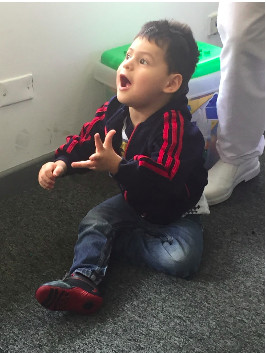 David currently does not attend school because of his health situation. He is independent to the best of his ability but because of his age and motor difficulties requires help in some tasks. In terms of verbal communication, he is limited to low frequency sounds and the pronunciation of some syllables however he is expressive with his facial expressions and nonverbal communication. He has difficulty in gross motor skills though he is able to grab objects he wants to hold. David does not walk yet independently. His play is unintentional though he enjoys free time. He presents a delay in intellectual development and communicative development. These delays are a result of a cerebral paralysis in infancy. David is a boy who shows affection through his smile and occasionally seeks physical affection. He likes to play with toys and is able to play alone without difficulty. He is an active child and therefore looks for ways to be entertained. He sometimes likes to play with others though it is not his preference. David is curious about the world around him and tries to touch and see as much as he can. He is especially attracted to things that move and have many colors.
Advertisements
Host: www2