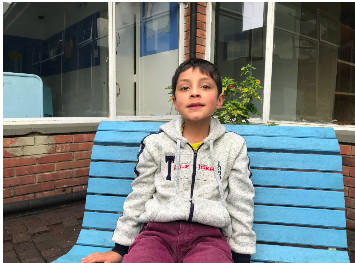 Joshl is a child who spent most of his life in a foster home with whom the child made a strong bond, according to the record. However, during his stay at the foundation, he does not make reference to the fact that he wants to return, talk or intensely miss his caregiver. On the contrary, he speaks of his present and of waiting to get another family for him and in the midst of his capacity, age and feeling, he mentions that it was partly due to his behavior the fact that the family that had been chosen for him had left sad. He does not want them to be sad, especially the figure of the mother, but he wants another family for him. He is a child who likes to be well presented, has good manners and recognizes them as saying thanks, good morning, asking for permission, etc. He is often sweet and affectionate. He understands easily but his verbal expression is difficult for him. He still requires a lot of work in terms of managing his emotions, self-regulation and handling strong nuances in his personality such as Egocentrism and low tolerance for frustration. Attention is drawn to marked behaviors such as irritability and high annoyance due to noise, agglomeration and, in general, being in a large group of people. He has patterns in his marked routines tending to be a bit obsessive. He has been modifying them little by little.
Advertisements
Host: ws1.elevati.net