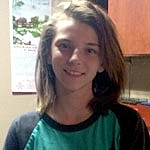 Athena is beautiful teenager. She is outgoing and sociable. She is a great advocate for herself. In her spare time, she enjoys playing on her tablet and going to the park. She wants independence and freedom more so than the average teenager. She would like to be adopted but would like the family to know that she would want to be able to have some freedom. She does not have a preference on the type of family she is adopted by. She thinks that she would do best in a family where there aren't any younger children and she prefers not to live with too many children at all. She would like to remain local as she has family members she would like to maintain a relationship with.