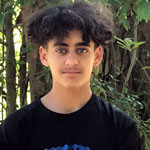 Meet John, he prefers to go by Louis. Louis has an olive complexion, dark brown hair, and giant blue eyes. Louis does not like to pose for pictures, though he definitely has a fun, playful side. He smiles easily and is very intelligent; Louis attends accelerated classes in school. Louis would like a family first and foremost that will allow him to keep his phone. He also thinks he would do well in a family where there are other children as he would like to have siblings. Louis thrives in a predictable, structured home where the rules are consistent and life is mostly predictable and stable. Louis is very close to his grandmother and would like a family who is willing to allow him to continue to have contact with her and other members of his family. Louis loves to play sports, specifically basketball and would like a family that also enjoys playing sports and other outdoor activities. Louis, like most kids his age, also greatly enjoys playing video games. He is very proud of a handheld game that he worked for and bought himself. Louis needs a family that is willing to be open minded and patient while building much needed trust between him and the family. Louis would do well in a family who is calm, very structured, and focused on positive parenting techniques and behavior plans to help him see his goals and assist him in achieving them.