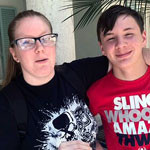 Peyton describes himself as about 50% each quiet and loud, serious and silly, and friendly and shy, but 100% hilarious. He is sweet and very charming, and he has no trouble striking up a conversation. He has a lot of musical talent; he taught himself to play the piano by ear, has composed his own original music, and is now taking formal lessons. He has an interest in programing and digital music as well, and he hopes to one day become a video game developer. He enjoys listening to video games music and dubstep, with the occasional classical composition and rock song mixed in. His case manager describes him as smart and respectful with a happy personality. He finds humor in everything and as a result prefers comedic television like Family Feud, Family Guy, American Dad, South Park, and Rick and Morty. Peyton has a lot of energy but can also be very laidback and easygoing. He gets along well with others, especially younger children, and he's really hoping for a younger sibling so that he'll no longer be 'the baby' of the family.
Advertisements
Host: www2