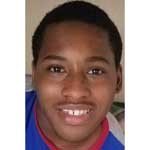 Trevion is an intelligent, outgoing, responsible, and opinionated individual. Trevion has a smile that will light up any room that he enters. Trevion is great at articulating his needs and wants. Trevion enjoys participating in performing and visual arts and would love the opportunity to participate in a program. Trevion enjoys listening to music, singing, drawing, browsing social media, and talking to his friends. Trevion describes himself as "I'm honest, kind, a push-over, gullible, clumsy, funny, energetic, artistic and musical." Trevion has set goals for himself. Trevion stated that he would like to complete high school and become a gemologist. Trevion enjoys studying gemstones. Trevion is a great youth, who has the ability to inspire others with his comedic wit, as he has done so in the past. Trevion loves great tasting food. Trevion would benefit from a family who is loving, caring, and has some form of interest in acting, music, and performing arts. Trevion likes to make music as well. Trevion needs a family who is patient and willing to work with challenges that may be encountered.
Advertisements
Host: www1