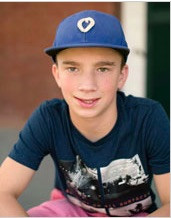 Zachary is a happy and healthy teenager with a lot of personality. He enjoys playing all sports, hunting, fishing, and just being outside. Zachary is an animated and active boy. He loves food and he has expressed he would eat just about any type of food but lists his favorite as seafood. Zachary is seeking parents who are willing to spend extra time assisting him to achieve his fullest potential academically. Zachary states that he wants to be adopted into a family with other children. He is excited to be a part of a forever family.
Advertisements
Host: www1