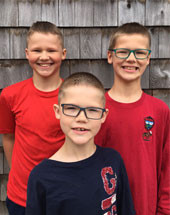 Jamison, Xander and Issac are a close sibling group looking for their forever family. They have resided together for most of their life and it is important that they remain together. Jamison was born in 2007. He is kind, caring and the oldest of three brothers. Jamison is the opposite of his brothers, in that he prefers to play inside. Jamison likes to play video games and with his marvel super heroes He does have a strong dislike for Nurf gun games, unlike his brothers but they are all able to work together in creating a safe environment so that Jamison is comfortable when they play. Jamison does well when he has a clear understanding of expectations. Xander was born in 2008. He is very caring and protective of his brothers and of those who he is close with. Xander loves to be outside whenever possible like his younger brother. He likes to play with Nurf guns and action figures. At times Xander and Issac can get overly excited and rambunctious in their play. Xander does his best in school when he has encouragement. His forever home should be one that can push him to his potential while being patient and supportive to him along with his brothers. Issac was born in 2011. He is very affectionate and loves to give hugs. When given the option Issac prefers to play outside and likes to be very active. He loves super heroes and Batman is his favorite. Since Issac likes to be active he can often get distracted and needs one step directions with reminders to complete non-preferred tasks.
Advertisements
Host: www2