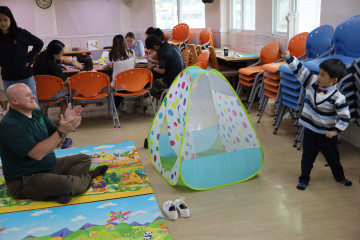 We met Kent for the first time on his 6th birthday last fall! Since this was his first time meeting us, he was pretty shy. We could tell that he has a close relationship with his foster mother as he looked to her for reassurance and followed her directions. In fact, his foster mother described him as “a little prince”! She said that he is sweet, cuddly, active, and likes attention. Kent did pretty well on the tasks that we asked him to do, including tossing a ball, standing on one foot, drawing a person and putting 6 step sequencing cards in order. When we asked him if he could add 2 + 3, he responded to the social worker “No, because I don’t speak English!” Okay, smarty-pants, you got us there! He wasn’t up to answering most of our questions, but he after a while, Bill Porter got up and invited him to play. That’s when we finally saw what I think is the true Kent – he was suddenly full of energy and was clearly having a fun time! Kent is reported to have some developmental delays, and we have information about his time living with his birth family in his profile.
Advertisements
Host: www2