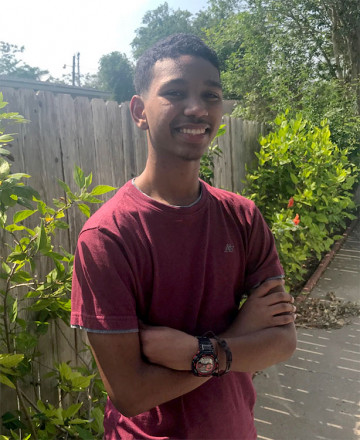 Christopher is an active and athletic young man. He plays tennis through his school and really enjoys the sport. He has received trophies for his tennis playing abilities and is passionate about the game. Christopher also enjoys riding his bike. He loves to go swimming and is hoping to be adopted by a family who either has a pool of their own or lives close to a community pool. His favorite foods are hamburgers and pizza. He hopes to be able to travel the world someday. Christopher has an outgoing personality and is easily described as a confident child. Christopher says his friends make him laugh when they say silly things. He has a great sense of humor and a dazzling smile. Christopher thinks families should know he is an outgoing and loveable child. He's hoping for a family who will encourage his smile to be contagious amongst them. Christopher is excited about the prospect of adoption and is open to meeting families. Visit me at the Heart Gallery of South Texas.

Christopher would like a family with a mom and a dad. Like many children, Christopher dreams of being the only child so his forever family can focus all of their time on him. However, Christopher's caseworker has bragged about how well he gets along with others and she thinks he would do well as a not-too-much bigger or little brother. Christopher gets along with other children and wouldn't mind having siblings, especially a brother, around his age or older.