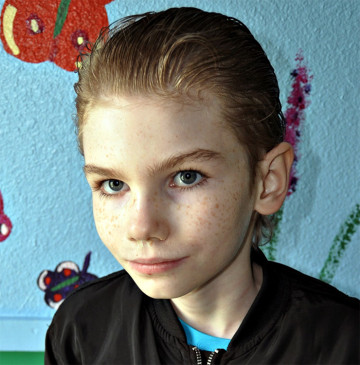 Cory can be described as the old soul of the group. He enjoys reading newspapers and can often talk at length about current events. Cory also enjoys reading comic books, and enjoys the colors in the comics as well. He would love to have a dad or uncle to go trolling through vintage comics with. Cory enjoys playing video games, building with Legos, and watching cartoons in his spare time. Cory can be quite the homebody, keeping himself busy around the house with his own little projects, but he does enjoy outings in the community. One of his favorite places to go is the zoo and he requests a trip there as often as possible. Cory also likes to walk through museums. Cory describes himself as a "classic" guy. One of his tell-tale markers that this is true is his affinity for The Star Spangled Banner.

Jacob, the eldest of the four brothers, is described as the most shy of the group. He will initially be standoffish when meeting new people and takes time to warm up. Dyllan, the second eldest, is the most level-headed of the group. Some may call him the lead decision maker, as his brothers will often trust his instincts the most. Cory, the third brother, is often mistaken as the youngest. This doesn't really bother him though because he is busy forging his own path. Cory is not afraid to speak his mind and let his opinions be known. Dustin, the youngest brother, is often the most animated of the bunch. He doesn't mind being the clown to break the tension in the group. As a group, they have a deep bond. When these boys have decided they are committed to you, they will not hold back their love and affection for you. Jacob, Dyllan, Cory and Dustin care deeply for each other. Visit me at the Heart Gallery of South Texas.

A family with a well-established connection to each other with a patient father and mother figure are the best fit for Cory and his siblings. When asked what his forever family looks like, Cory has said it definitely has a mom and a dad. He is also open to having other siblings in the home and wouldn't mind pets, as long as they don't eat his Lego's. He and his brothers are continuously learning how to understand and connect to each other as a team. It will be imperative their family continue to strengthen that connection. Cory and his brothers each have their own academic needs and will benefit from someone who has experience in identifying and assisting to improve those needs.