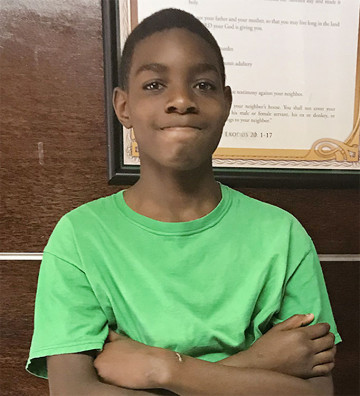 Dacorion is a very energetic child who loves playing all types of sports especially basketball and football. He would love to try out for the basketball team at school or have an opportunity to play baseball league. Dacorion also enjoys playing his X-box or Play station video games. He is quite competitive while playing his games and will sometimes display frustration whenever he feels he did not do his best. Dacorion has an artistic side as well and loves to do crafts. He enjoys coloring and putting Lego figures together. He is a compassionate child and loves giving hugs to his caregivers. He enjoys pleasing his caregivers and receiving verbal praise. Dacorion is a well-mannered and polite child to other adults as well. He tends to be shy around strangers at first but usually warms up pretty quickly. He is a great helper and loves to help in the yard or doing chores around the home. Dacorion thrives in a loving structured environment which has a set schedule for things to be done. He is very possessive of his belongings and will sometimes get upset if they are taken from him. However, he can quickly be redirected with fair and consistent discipline. Dacorion gets along well with boys who are older or children who are younger than the age of five. Dacorion is excited about the possibility of having a forever family.

Dacorion will be best served with a physically active and outgoing family. He will do well in a home as the only child or in a home with no more than two other children. Dacorion interacts best with children who are older than him. He will thrive with a parent or parents who have a flexible or predictable schedule.