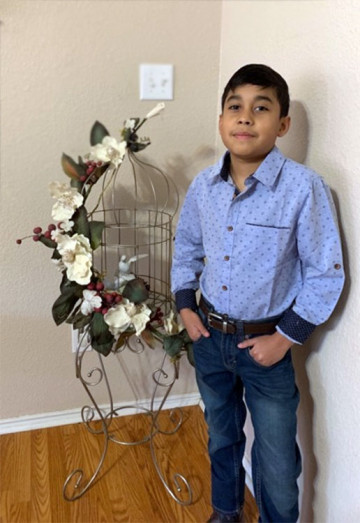 Danny is an energetic boy who loves to play outdoors. He is a very athletic child and enjoys playing football. Danny likes to ride his bike almost daily. He also enjoys running around outside and playing soccer. His favorite foods are entomatadas, fried tilapia, and pizza. Blue and green are his favorite colors. A few of Danny's favorite cartoons and characters are SpongeBob, Henry Danger, and Gabby Duran. He is a friendly child who makes friends easily. Danny enjoys his science and gym classes best at school. Danny loves going to school and hates to miss school, even when he is sick. Danny loves listening to music and will sing along to any song. Danny also likes building Legos and playing with his remote-control cars.

Pamela, Danny, and Yuliette are three loving siblings who, like most siblings, have moments of arguing but they won't remember what they had been arguing about just a few minutes later. Pamela loves to have support of her siblings when she is competing in wrestling. Pamela would like to have a cat in the home, but Danny and Yuliette would rather have a dog. Pamela, Yuliette, and Danny are very friendly children who make friends very easily. The siblings all enjoy entomatadas and spending time outdoors. Pamela enjoys helping her siblings, she'll often help them clean their rooms so they can have extra time to play. The children love listening to music and all like to sing. Yuliette is usually the one to add the dancing moves into their songs.

Danny needs a loving family who provides a safe home environment. His family will play with him and be patient and understanding of Danny's background. He would like a family who is open in maintaining family connections. Danny will be adopted with his siblings, Yuliette and Pamela. Danny would like to have parents who treat him and his siblings all equally. Danny would also love to have a dog as a pet.