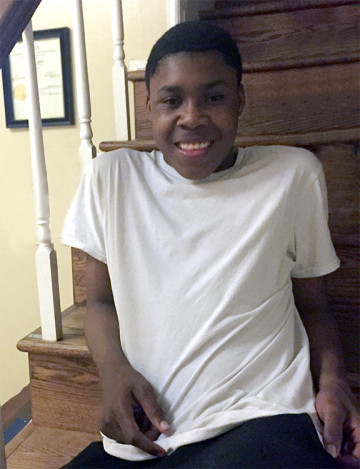 Ivy is a very smart, energetic, and well-mannered youth. Basketball is his favorite sport! He enjoys playing it as an extracurricular activity and in his spare time. Ivy aspires to play for the Lakers when he grows up, because Kobe Bryant is on the team. He also likes to play video games, especially NBA 2K17. Ivy is a good student at school. His favorite subject is science. He says he enjoys science, because he can do different types of experiments. Although he struggles some in math, he feels he does well overall. Ivy is very friendly and gets along well with others. He enjoys meeting new people and making new friends. Ivy stated he enjoys helping out with day-to-day chores around the house. He also likes attending church once a week with his foster family. Ivy loves animals and really enjoyed being part of 4H.

Ivy wants a family with a mom and a dad. He looks forward to any siblings or cousins with whom he can play. He wants a family who will remain in his life throughout adulthood. Ivy needs a family who will enroll him in extracurricular activities and cheer him on from the sidelines. Ivy has siblings who are not part of this adoption. It is very important to him that he be able to stay in contact with them. His family will need to be supportive of this and his strong ties with them. Ivy will do well with a strong father figure to be a good role model for him. Ivy will thrive in a family that dedicates time to him and shows him that he matters to them.