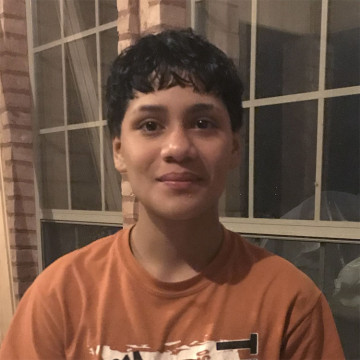 Jorge is an easy going teen. He is very charming and charismatic. Jorge does well in school when he is motivated. Jorge's favorite subjects are history, physical education, and science. He likes enchiladas, pizza, and spaghetti. Jorge could eat pizza every day, if he had the opportunity. He enjoys playing football and being outdoors. Jorge's favorite football team is the Dallas Cowboys. He enjoys watching the games on television and playing video games with his siblings. Jorge makes friends easily with his peers, and enjoys spending time with them after school. Jorge would like to have a car of his own one day and he is also interested in owning a horse.

Alejandra, Jorge, Nicole, and Marco are four siblings who get along well with each other. They love one another and enjoy spending time together. The siblings enjoy going on family outings to the movies or staying home to play video games. All the children have sweet, caring and charming personalities. Alejandra, Nicole, and Jorge are outgoing and they enjoy interacting with others. Marco is more of a homeboy, he enjoys staying in and having movie nights. Marco is very athletic, but prefers to only shine on the field. Alejandra is a star athlete and excels in school. She is also very creative and enjoys working on arts and crafts. Nicole is very athletic, and enjoys going hiking and on runs. Nicole is very protective of her siblings and likes to look out for them. Marco is the youngest and he enjoys being active and playing football and swimming. Marco is following in his brother's footsteps and is playing football at school.

Jorge will benefit from a family who is consistent and structured. He thrives in a stable and structured environment. His family will offer unconditional support, guidance, and supervision. They will understand him and offer positive reinforcement. Jorge would like a family who will encourage and support his sibling bond as he will be adopted with his brother and sisters. His family will support his need and desire of playing sports.