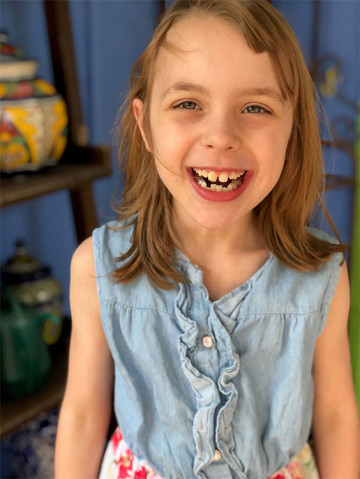 Livia is a whimsical and funny child with a colorful imagination! She is an avid writer and artist who wants to be able to share her video game talents with the world someday. Livia has so much love to give and wants to make sure people like her. She is confident in her passions, which include the video game, Bendy and the Ink Machine, as well as Pokemon. Livia is a wonderful student who enjoys going to school and is very proud of her work. She wants to make more friends, though she appreciates the ones she has. Livia wants to have so many jobs when she grows up, she doesn't know where to start! Though, she knows one day she wants to be a foster mom. She likes the animals she lives with currently, but doesn't think she is brave enough to have a lizard yet.

Livia and Alexander are a silly and entertaining dynamic duo! Livia is a fantastic and helpful big sister, who love to play with her younger brother. Alexander is a wiggly and silly child with a cheerful disposition and never ending giggles. He loves to receive attention and affection and plays well with his older sister. Alexander and Livia are active and imaginative in their play - they enjoy playing outside and with a wide variety of toys like Ninja Turtles, Barbies, and Pokemon. While Alexander worked on developing his speech, Livia spoke for him and advocated for his preferences, wants, and needs. Her creativity creates an engaging world for Alexander to play in, and he enjoys being a part of the world she has created for him. Alexander and Livia play independently of each other and take time apart, although due to Alexander's age he does want to engage with the people around him.

Livia needs a family who is open minded and patient, and who will focus on her healing. She does best when she can talk things out with her caregivers and is given options. Livia needs to be in a family who will meet both her needs, and those of her younger brother's development. Livia's forever family needs to be structured, while also encouraging of her many interests. Livia would like for her future forever family to have two moms who can give her a lot of attention. She is open to having more siblings, in addition to her brother, but wouldn't want more than one older brother and would otherwise like to be the oldest. Her forever family will understand her two older siblings will be a part of her life, even if they live very far away.