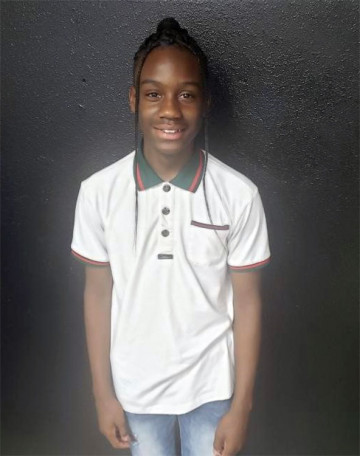 Tyrese is an intelligent, active youth who may come across as initially shy. He is learning to develop new friendships and healthy interactions with his peers. When he is focused and encouraged by his caregivers, he excels in school. Tyrese's favorite classes are science, math, and reading. Tyrese is very athletic. He especially enjoys playing basketball with his older brother and friends. He has a close connection with his older brother, but at times needs guidance with appropriate interactions with him. Some of Tyrese's favorite activities include participating in sports and watching television with family and friends. He also has new found interest in traveling with his family. Tyrese wishes to be adopted and to become a NBA star. Tyrese can be quiet and reserved, but talking about his favorite sports can bring out his talkative side.

Tyran and Tyrese are two brothers who share a unique connection with one another. They both have a strong love for sports and really enjoy competing with others and each other. Tyrese really looks up to his older brother in sports, but sometimes can become frustrated with Tyran when he tries to parent him. Tyran loves his little brother and feels it is his job to look after Tyrese. These two also love to do indoor activities, such as watching movies and playing video games. The pair have a new found interest in traveling. Both brothers enjoy school and excel with encouragement. Tyran and Tyrese look forward to finding their forever family to share their hobbies and interests. Visit us at the Heart Gallery of North East Texas.

Tyrese's future parents will show him how to develop healthy relationships and teach him to turn his great qualities into leadership skills. They will help him build confidence in himself during his social interactions, which will help to further bring him out of his shell and lay down the foundation for a successful life. His forever parents will be enthusiastic about helping him explore his goals for the future. He can't wait to share his active hobbies with his family.