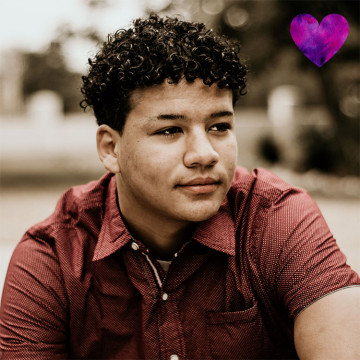 Zakariyya, who goes by Zak, is a happy and quiet youth with a great sense of humor. He is shy at first but will open up once he senses a person is being honest and genuine with him. Zak enjoys the outdoors and has expressed an interest in hunting and fishing. He likes to play video games and watch Marvel movies. He has stated he would like to go to college and become either an astronaut, engineer, or a scientist. Zak has three favorite subjects which are math, science, and history. He thrives academically with one on one attention at home. Zak does well with consistent redirection at school and at home as it helps him stay focused on tasks. Visit me at the San Antonio Heart Gallery.

Zak is anxiously awaiting his forever family. He will benefit from a family who has a moderately high level of structure, supervision, and support. He will thrive with a family who is fully invested in his academic work and is willing to give him one on one instruction. Zak needs a family who is active and enjoys the outdoors. He will benefit from a family willing to provide him with unconditional support and guidance. Zak has expressed the desire for a family, preferably out of state. He stated he would like a two parent home with an older female sibling and an infant sibling. Zak also likes dogs and would like to have a pet. Zak needs a family willing to advocate for him while providing new challenges to encourage his progress.