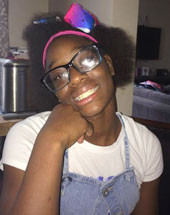 Deshawn in a comedic teenager with a very optimistic outlook on life. He loves football and baseball, and has played both before for school teams. Deshawn attends camp with a local club and enjoys the programs that are offered through the club and the experiences it allows him to take part in. During the summer he likes to go to camp and also take vacations if he can. He also enjoys drawing and playing video games. Though Deshawn says he is “no chef” he can cook ramen and back his favorite cookies, which are chocolate chip of course! In the future Deshawn would like to go to college. Although he is undecided about what school he would like to attend, he knows he is interested in majoring in the field of technology. Ceara is an energetic teenager with a bubbly personality. She loves to dance, color, and eat. Ceara also belong to a local club which she actively participates in. She is interested in taking ballet lessons, as she wishes to one day teach dance. Her favorite book is “Eight Keys” by Suzanne LeFleur. When it comes to art Ceara prefers painting. Her favorite sport is basketball but she does not have a favorite team. She likes to cook and back, especially cheeseburgers, cakes, cupcakes, and cookies. Hawaii is Ceara’s dream vacation destination so she could play on the beach and swim. These days she is already into gymnastics, but she would like to expand into cheerleading as well. When she goes to college Ceara would like to study biology.
Advertisements
Host: www1