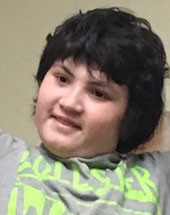 Danny (Daniel) is a 13 y/o Caucasian male born in 2006. Danny loves to play on cell phones/electronic devices, mostly on YouTube to watch music videos. Danny loves Michael Jackson and will often dance to his songs, specifically “Thriller”. Danny enjoys spending time with his peers. He enjoys toys that he can manipulate with his hands. Danny likes physical activities like gym time. Danny also enjoys board games. Danny loves M&M’s (though sometimes he says he doesn’t) and likes to be outside. Danny is often shy around new people, but once Danny gets to know you, he opens up more and will give hugs and remember who you are. Danny has been around animals and has enjoyed those encounters.
Advertisements
Host: www1