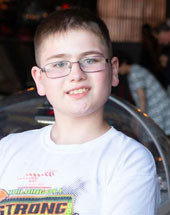 Meet Dylan! He is excited about the idea of adoption and about searching for his forever family. Dylan will do well in a home with 2 parents or with a single dad. His ideal home would consist of a loving family where games of all types are played regularly. Dylan dreams of having a kind and loving family, having a job that is not too complicated and he wishes he could be the smartest person in the universe. He will tell you his spirit animal is a tiger because they are brave, fierce, smart and protective. Dylan’s favorite subjects in school are math and science, but he says he enjoys them all. Some of his other favorite things include slushees, frosties, ice cream and Mexican food. Dylan’s favorite movie is Detective Picachu and he loves video games (especially Minecraft and Roblox). Piano playing and fiddling with instruments have been interests for quite some time and he also enjoys singing. He is tech savvy and enjoys anything with a screen! He wants his future family to know that he may become a YouTube celebrity and wants to be a computer specialist or an astronaut when he grows up! Seeing volcanoes in person would be something on his bucket list if he were to create one and if he could have a super power, it would be to control the weather. Dylan enjoys being inside playing games or reading but he also likes spending time outside. Dylan has a beautifully unique personality and enjoys being around people. He loves to laugh, thrives with praise and does well with one on one time with people who care about him. At times, Dylan needs extra support and guidance when in social situations; over time, a family can model this and encourage him. He is protective over the ones he loves and now we need to find him a family to be protective over him.
Advertisements
Host: www1