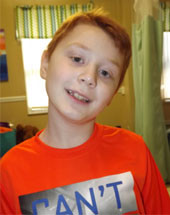 Noah was born in 2011, and he is a handsome and active young man! He enjoys playing outdoors on the playground. He enjoys swinging on the swings, doing the monkey bars (which he is very proud of), riding a bike, and playing outdoor games. He loves sports especially running. He finds it a great outlet. He also enjoys playing basketball, soccer, basketball, and football. Noah plays Minecraft, video games, and Legos. He likes listening to music. Noah enjoys art, especially drawing, coloring, painting, and making picture frames. Noah's favorite foods are mac n cheese, cheeseburgers, soda, rootbeer floats, white chocolate, Hershey's cookie and cream candy bars. He enjoys being around animals. His favorite subject varies in the past it has been math and art. He enjoys playing Beyblades and Pokémon. He wants a forever family and wants to be in a family. Noah is big into receiving gifts that are name brand; he especially likes Adidas and Nike. Noah reported that he wants to go to church and he wants a mom and a dad. He reported that he likes to swim, so a family that goes swimming would be nice.
Advertisements
Host: www2