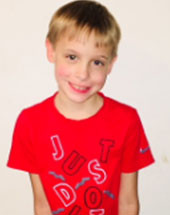 Jordan is a happy and loving child. She loves to give hugs and compliment others that they "look pretty". Jordan loves Minnie Mouse toys, and Frozen toys and clothing. She likes playing with dolls and dressing up. Jordan enjoys watching television and singing. She likes to listen to Z104 and sing along to most of the popular music played on that station. Jordan likes to meet new children and adults, and will instantly interact with others. Jordan can play by herself, but does prefer to play with peers. Jordan has a good appetite and is not a fussy eater. Jordan is currently doing well academically and behaviorally in school. Jordan has a twin brother who she loves very much, and they get along well with each other. She is very active, and is interested in sharing her knowledge and thoughts about various things. Jordan loves her long hair, and she prefers to keep her hair that way. Jordan has expressed that she would like to continue contact with her birth mother and birth maternal uncle after adoption. Steven is a happy and fun-loving child. He enjoys telling jokes and laughing at the jokes of others. Steven is very friendly. Steven loves to watch football and basketball with his foster family. His favorite teams are the Indianapolis Colts, the Notre Dame Fighting Irish, and the Indiana Pacers. Steven is a big fan of Paw Patrol and Batman. He enjoys watching television with his foster family, and likes to be around other people. However, he is able to play by himself with no problems. Steven has a healthy appetite, and he is not a fussy eater. Steven needs a little extra assistance when it comes to school and learning, but he is a cooperative student. Steven has a twin sister who he loves very much, and they get along well with each other. Steven loves listening to pop music and country music, and he usually sings along when the radio is on. He is also a big Elvis fan, courtesy of his foster mother. He likes to shop and can be a sharp dresser. Steven is a joy to be around, and he is a very easy-going child.
Advertisements
Host: www2