The official coat of arms or Ukraine.
Source: Wikipedia.org. 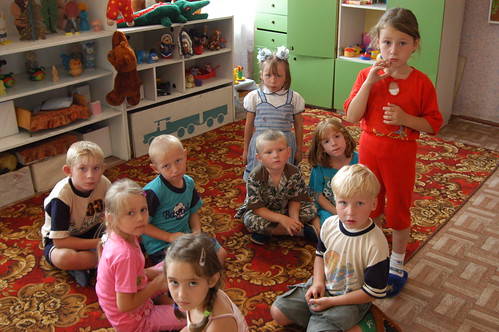 The Annunciation Cathedral is one of the tallest Orthodox churches in the world.
Source: Wikipedia.org. Notice: Update on the Status of Intercountry Adoptions from Ukraine (March 11, 2014)

The Department of State is not currently aware of delays in the intercountry adoption process in Ukraine following former President Yanukovych’s February 22 departure from Kyiv and the Ukrainian Parliament’s establishment of a new government on February 27. The Department has received information from the Ukrainian Ministry of Foreign Affairs that it remains open and that delays are not currently expected in the issuance of Ukrainian passports to adopted children beyond the normal 10 day processing timeline.

The U.S. Embassy remains open and is providing full consular services including issuance of immigrant visas to adopted children. Consular officers at the U.S. Embassy are actively engaged and in direct communication with those adoptive parents who may be affected by the current situation.

U.S. families in Ukraine completing an intercountry adoption are encouraged to communicate directly with the U.S. Embassy in Kyiv at KyivAdoptions@state.gov. Additional questions regarding intercountry adoption may also be directed to the Office of Children’s Issues at AskCI@state.gov. For more information regarding the current situation in Ukraine and the latest travel warning please visit the Bureau of Consular Affairs’ website at travel.state.gov.

On July 14, 2011, the presidential order which extends the State Department on Adoption’s (SDA’s) authority to process adoptions was published in Ukraine. We have been informed by the SDA that they have resumed processing adoption applications. As described in a previous alert, the SDA will have the authority to continue processing adoptions until the Ministry of Social policy is ready to take over as the new adoption authority in Ukraine. The Ministry does not yet know when they will be prepared to take over adoption processing.

The SDA also informed the embassy that the new amendment to the Family Code is now in effect. This requires orphans to be registered on the central adoption registry for one year and to be at least five years old before they are eligible for intercountry adoption. The amendment exempts children with certain special needs, relative adoptions, and sibling adoptions. Please note that the Ukrainian government is in the process of updating the definition of special needs, a process which by law should be completed by October 11, 2011.

We will continue to encourage the Ministry of Social Policy to protect adoptions where U.S. prospective adoptive parents have already been approved by the SDA to adopt a particular child. We will also be following new developments closely to understand how they will affect the families currently in process and will be posting relevant updates.

According to a resolution that came into effect on December 1, 2008, the Ukrainian Adoption Authority, the SDAPRC, will now have the right to refuse to register your dossier if, at the time of the dossier's submission to the SDAPRC, the central database of Ukrainian children available for intercountry adoptions will not contain any children complying with the recommendation in your home study. Given the statistics published by the SDAPRC and available on the website of the U.S. Embassy in Kyiv at: http://kyiv.usembassy.gov/amcit_adoptions_notice_0119_eng.html, there are currently no healthy children (or children with minor, correctable health problems) under three and very few under six years old. Therefore, if you are recommended for a healthy child or a child with minor/correctable health problems under six years of age, the SDAPRC is very likely to refuse even to accept and register your dossier.

To bring an adopted child to the United States from Ukraine, you must be found eligible to adopt by the U.S. government. The U.S. government agency responsible for making this determination is the Department of Homeland Security, U.S. Citizenship and Immigration Services (USCIS). Learn more.

There are no residency requirements for intercountry adoption from Ukraine.

Under a Ukrainian law which came into effect on April 24, 2008, prospective adoptive parents must be at least 21 years old, and at least 15 years older, but not more than 45 years older than the adopted child. If only one of the adoptive parents complies with these age requirements, the adoption can be completed in the eligible parent's name only. If the child is being adopted by a relative, the age difference is not considered.

Foreign citizens must be married in order to be eligible to adopt from Ukraine.

While there are no specified income requirements, prospective adoptive parents are required to submit documentation identifying their income/financial standing.

Please also see the section listing the documents required for an adoption from Ukraine. Note also the new homestudy requirements as of December 1, 2008, listed in that section.

A valid U.S. passport is required to enter and leave Ukraine. Only the U.S. Department of State has the authority to grant, issue, or verify U.S. passports. Getting or renewing a passport is easy. The Passport Application Wizard will help you determine which passport form you need, help you to complete the form online, estimate your payment, and generate the form for you to print-all in one place.

In addition to a U.S. passport, you also need to obtain a visa. A visa is an official document issued by a foreign country that formally allows you to visit. Where required, visas are attached to your passport and allow you to enter a foreign nation. To find information about obtaining a visa for Ukraine, see the Department of State's Country Specific Information.

When traveling during the adoption process, we encourage you to register your trip with the Department of State. Travel registration makes it possible to contact you if necessary. Whether there's a family emergency in the United States, or a crisis in Ukraine, registration assists the U.S. Embassy or Consulate in reaching you. Registration is free and can be done online.