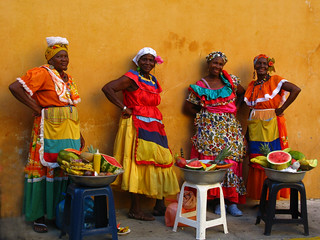 The Republic of Colombia

What the People are Called

The descendants of the original native inhabitants, Spanish colonists, African people originally brought to the country as slaves and 20th-century immigrants from Europe and the Middle East have produced a diverse cultural heritage in Colombia. The demographic distribution reflects a pattern is influenced by colonial history. Whites tend to live mainly in urban centers, like Bogotá or Medellín, and the burgeoning highland cities. The populations of the major cities also include mestizos. Mestizo campesinos (people living in rural areas) also live in the Andean highlands where some Spanish conquerors mixed with the women of Amerindian chiefdoms. Mestizos include artisans and small tradesmen that have played a major part in the urban expansion of recent decades.

Black Africans were brought as slaves, mostly to the coastal lowlands, beginning early in the 16th century and continuing into the 19th century. Large Afro-Colombian communities are found today on the Caribbean and Pacific coasts. The population of the department of Chocó, running along the northern portion of Colombia's Pacific coast, is over 80% black. British and Jamaicans migrated mainly to the islands of San Andres and Providencia. A number of other Europeans and North Americans migrated to the country in the late 19th and early 20th centuries, including people from the former USSR during and after the Second World War.

Many immigrant communities have settled on the Caribbean coast, in particular recent immigrants from the Middle East. Barranquilla (the largest city of the Colombian Caribbean) and other Caribbean cities have the largest populations of Lebanese, Palestinian, and other Arabs. There are also important communities of Chinese, Japanese, Romanis and Jews. There is a major migration trend of Venezuelans, due to the political and economic situation in Venezuela.

More than 99.2% of Colombians speak the Spanish language, also called Castilian; 65 Amerindian languages, 2 Creole languages and the Romani language are also spoken in the country. English has official status in the San Andrés, Providencia and Santa Catalina Islands.

The overwhelming majority of Colombians speak Spanish (see also Colombian Spanish), but in total 101 languages are listed for Colombia in the Ethnologue database. The specific number of spoken languages varies slightly since some authors consider as different languages what others consider are varieties or dialects of the same language, the best estimates recorded that 70 languages are spoken in the country today. Most of these belong to the Chibchan, Arawak, Cariban, language families. There are currently about 850,000 speakers of native languages. Spanish is a Romance language with approximately 470 million speakers, 410 of whom speak it as a first language while the remainder speak it as a second language. A significant number of people also speak Spanish as a foreign language. Spanish is spoken in Spain and 22 other countries including: Andorra, Argentina, Belize, Bolivia, Cayman Islands, Chile, Colombia, Costa Rica, Cuba, Dominican Republic, Ecuador, El Salvador, Equatorial Guinea, Guatemala, Honduras, Mexico, Nicaragua, Panama, Paraguay, Peru, Uruguay, the USA and Venezuela

For more information on the Spanish alphabet go here.