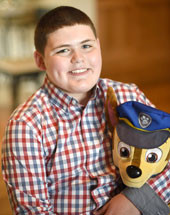 Jesse, born October of 2006, is a caring and loving child who desires plenty of hugs and is often smiling. He is an active young man who enjoys church and watching movies. He also likes to shop and buy toys. Jesse is particularly interested in trains, trucks, and the cartoon on tv, Paw Patrol. He very much wants a dog and he enjoys being around animals. Jesse has recently been exercising at a local gym in his area and enjoys meeting new people. He would like to remain in contact with his older sister after he finds his forever family. Jesse reports that he wants a patient and understanding forever family who will love him unconditionally. Photograph courtesy of www.heartgalleryalabama.com
Advertisements
Host: ws2.elevati.net