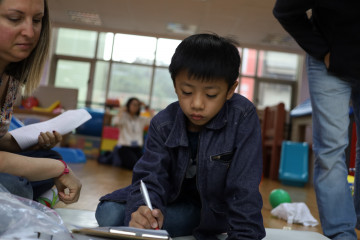 Ash is a sweet, clever 10 year old that we had the pleasure of meeting in November 2019. It truly was a pleasure spending time with him – he did every task we threw his way, and he did them well! He concurred all of our hard puzzles and was so gracious with everyone – us, the social workers, the other kids in the room. Ash is in the 5th grade where he gets good grades and told us he has lots of friends. He is learning some English in school and we could tell he was very proud to answer our questions in English when he could. Ash loves basketball and his favorite player is Steph Curry. He told us he wants to play in the NBA when he grows up! He also loves playing dodgeball and other sports in PE. When not playing sports, he likes reading, specifically detective stories and comic books about African adventures. His social workers told us that he longs for a family, and when we asked how he feels about the possibility of being adopted he responded “Happy!” in English with a huge smile on his face. His whole face squints up when he smiles, and it’s so adorable! When we were almost done with our interview, he held up a finger to say “hang on”, ran out of the room and came back a minute later with two cups. He sat back down at the table, pulled up a song on the social worker’s phone and then proceeded to perfectly preform the “cup song”. We quickly captured a video of it, and are happy to share it with anyone who would like to learn more about possibly matching to Ash!
Advertisements
Host: www2