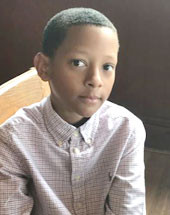 Taeyon has a big heart. He is creative, articulate and loves to learn new things. Once he becomes familiar with new people his shyness dissipates and his kind personality shines through. Taeyon enjoys video games, drawing, amusement parks, and playing sports, especially basketball. He likes reading so much that it is one of his favorite classes in school, along with math. In the future Taeyon would like to go to swim camp, visit England, and become a video game designer. He feels being a game designer will allow him to build the games he imagines and get paid to do something that he finds fun. Taeyon is the second youngest of five siblings. He enjoys playing sports and video games with his older brothers, and likes that they like most of the same things like basketball, video games, and pizza. Taeyon is in need of a nurturing, and supportive permanent home where he can thrive emotionally.
Advertisements
Host: ws1.elevati.net