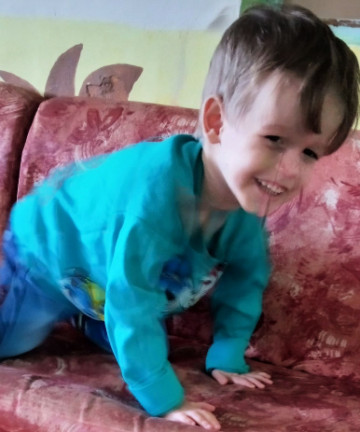 Linus was born in September 2015 and has been diagnosed with porencephaly, right-sided cerebral atrophy, congenital hydrocephalus (shunt installed and revised), visual impairment due to bilateral optic nerve atrophy, nystagmus, hypotonia, and cerebral palsy with hemiplegia. He frequently has viral infections. His development is delayed. Linus is an interactive boy who displays a rich variety of emotions. While predominantly a positive child, seeking individual attention and emotional closeness, Linus can become upset from time to time and it is then difficult to calm him. He has formed attachments with certain staff members and other children at his orphanage. Linus’ receptive language is well-developed and he understands what is communicated to him pragmatically in everyday life. He speaks in short sentences, asks questions, and participates in dialogue. Linus sits independently and crawls well. He climbs furniture and stands while holding on to a support. Linus transfers objects between his hands and feeds himself. His movements are becoming smoother and more coordinated. Due to his visual impairment, Linus actively explores his world through sound, smell, and touch. Using these senses and his residual eyesight, Linus has acquired an understanding of space and time. He participates in games and plays with toys. Linus loves music, rhythmic motions, and singing. Linus has a rudimentary knowledge of adoption, having seen other children leave with their new families, and is open to growing up in a different environment with a mother and father.
Advertisements
Host: www1