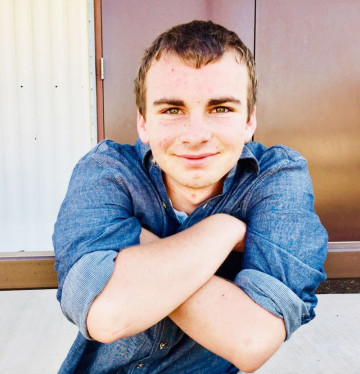 Miles is a talented young man who has goals in life and wants a family there to support him as he works hard to obtain his goals. He has a strong work ethic and enjoys being in the outdoors and actually likes to mow the grass. His short term goals include finishing high school with passing grades, getting accepted into college to study medicine or attend a police academy, obtain his driver's license, and buy a car. He would like to pursue a career as a paramedic or a police officer because he feels compelled to help others and wants to save people's lives. He has a healthy appetite and isn't a picky eater. Like most youth his age, his favorite food is junk food such as hamburgers and pizza. If he had the opportunity to learn any new skill, he said he would like to learn how to cook and learn to play a new instrument. He used to play the baritone, but now he would like to learn to play the drums. Could you be the family that spends quality time with him and teaches him how to create savory culinary dishes and encourage him to explore his artistic side by promoting his passion for learning a new instrument? Miles enjoys listening to music which he does in order to relax. His favorite genres are country or classic rock. He finds it soothing to listen to at night as he winds down for the evening. He is a real history buff and enjoys learning about the Civil War, World War 1, and World War 2. His favorite genre of movies is Western movies, and he could watch Tales of Wells Fargo over and over as it never gets old. Miles isn't one to sleep in. He is up by 6 am on weekdays and at the latest 7:30 am on the weekend. He enjoys doing anything in nature which includes riding a bike. He is well rounded in that he also likes to participate in indoor activities such as playing video games just as much as he enjoys spending time outdoors. He enjoys video games that are action related or have a fable story line. He is an avid reader and reads every day. His preferred reading genres are horror, thrillers, or action. One of his favorite books is Red Rising. His idea of a good time would be to go to the library, Barnes and Noble, camping, or hiking. One of his favorite hobbies is fishing so if there any avid fishermen out there, Miles would love to be your fishing buddy. His favorite quote is, "If you don't apply, let it fly" which is something that he thinks about in order to prevent becoming upset over petty things. Miles has a very relaxed personality. He likes to sit outside, relax, and enjoy the scenery. He likes animals such as dogs, cats, and turtles. If he could have his own dog, he would like a german shepherd. He likes learning about insects. He says that he would enjoy any family activity where the family is able to interact such as going on family walks If he could go anywhere, he would like to go any excursion where he get to explore a historical site such as the Alamo in San Antonio. He describes himself as an explorer. Will you be the family that shares his enthusiasm for the past and makes memories exploring historical sites as a family? Miles has a big personality and makes everybody laugh. He is loving, passionate, and caring. He states that if you respect him, he will respect you. He will go above and beyond for those that he cares about. He has a servant's heart and only wants to help others. People who know him well say that Miles is protective of those he cares about and is not selfish at all. Miles is an interesting and unique young man. He is intelligent and also likes to spend his spare time writing. He is currently writing a novel of his own and given the opportunity would like to be involved with writing the school newspaper or a photography class. If he could have anything that he wanted, he would want to prove to the world that he is not useless and that he can apply himself to earn and obtain his goals. He says he just wants a family that will love him.

The ideal family for Miles would be a supportive family who would be able to take care of his needs. He would be open to living in the city or the country. He would prefer to remain in Texas; however, he would be open to relocating out of state for the right family. His forever family for Miles would be able to provide unconditional love and consistent structure. He will do well with a family who provides activities done as a family but will also encourage him to follows individual pursuits. His forever family will be trustworthy and will always be there for him. His forever family will encourage him to be creative and express his individualism while achieving his goals.