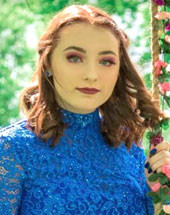 Sahara, who goes by Raven, describes herself as an "edgy fifteen year old". She is very artistic and loves to draw, paint, and read. She loves watching movies and listening to music. Raven also sees her makeup as art, and will sit and do her makeup until it's perfect if she has the opportunity. For the most part, she thinks that she is hyper, but has her days where she wants to lounge around the house in sweat pants. Raven loves animals and claims that cats and dogs are very therapeutic for her, as she has had pets before. She is very independent and organized, and loves to have a clean space. The only chore that Raven doesn't like to do is the dishes. She wakes herself up for school in the mornings and gets herself ready for the day on her own. She is a straight A student, and is really focused on her studies. She claims that she wants to be a psychologist when she gets older, and wants to use her experiences in foster care to help youth that come into similar situations. She is good with smaller children, and likes the idea of having siblings around the toddler age the most. She is adventurous and likes the outdoors. She likes to spend most of her time outdoors going roller skating and going hiking. Raven fits in very well wherever she goes, and is a positive young lady.
Advertisements
Host: www1