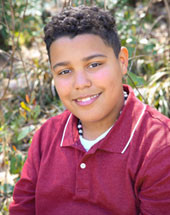 Jordan, born in 2006, is described as smart and gifted. He has been told many times that if he gave it 100%, he could literally do anything! He enjoys reading and is currently starting the Harry Potter series. It is noted that he reads more than he watches television. Jordan would like to become a Boy Scout when he gets adopted. He enjoys attending football games. Jordan is both witty and sarcastic. He enjoys having intelligent conversations and he really enjoys cracking jokes. He loves to talk about robotics and electronics. Jordan struggles with talking about emotions. He is a generous soul who loves to give hugs. He enjoys spending quality time with those he loves. Jordan loves to go on outings. As is sometimes the case, he acts more like the big brother versus the little brother to his sister Kayleigh. These two children are being recruited for separately. Photo courtesy of www.heartgalleryalabama.com
Advertisements
Host: www2