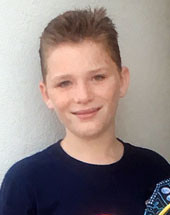 Terry, born in August 2006, is a Caucasian male with light brown hair, brown eyes, and a smile that lights up the room. Terry is the oldest of five children. All of his siblings are his half siblings, and all are girls. Terry has one sibling in which he shares the same mother, and three siblings in which he shares the same father. Terry does not reside in the home of any of his siblings. Terry has a relationship with his two siblings who are currently residing in their adoptive placement and would like to maintain those relationships post-adoption. Terry loves playing outside and hopes to one day have a trampoline of his own. His is a very laid back child who is very inquisitive. Terry enjoys watching television and his favorite superhero is Batman. Terry would like to be a firefighter when he grows up. He is a very sweet, caring, and outgoing child. He is of average height for a child his age. He is extremely outgoing and will speak to anyone. He is able to make friends easily, but has moments where he wants to be left alone. Terry is very inquisitive and enjoys learning new things. He enjoys playing both inside and outside. He hopes to be adopted by a family who has a trampoline and a dog. Terry attends church regularly and seems to enjoy it. He has bee the only child in his current placement and can entertain himself. However, Terry hopes to be adopted by a family with at least one other child. He stated he would be happy with a brother or a sister, he doesn't have a preference. Photograph provided courtesy of www.heartgalleryalabama.com
Advertisements
Host: ws1.elevati.net