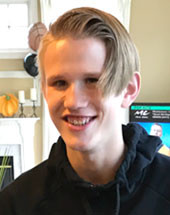 Daniel is engaging with a fantastic sense of humor. He takes pride in his appearance, always matching his athletic clothing and combing his hair "just so." He is strongly interested in the basketball player Steph Curry and takes pride in his collection of "Curry shoes." He can usually be found shooting baskets, playing video games, or on his tablet. Daniel has made Honor roll several times and enjoys going to school. He especially likes math class. He excels in athletics and basketball is his favorite sport. He joined both the school and a league team. Outside of school he also takes Tae Kwon Do lessons and has earned his black belt and four stars, well on his way to earning his second-degree black belt! Daniel was previously invited to participate on the sparring team and did so for over a year.
Advertisements
Host: www2