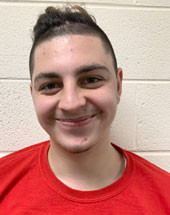 Cody is an outgoing and talkative teen with a great sense of humor. He is most often seen smiling and laughing. He has a kind heart and enjoys helping others. He attends church and youth group regularly. His hobbies include being outside, playing basketball, riding his bike, and playing video games. Cody is most proud of his gaming skills and his ability to learn new games quickly. He likes baking desserts and cooking meals. His favorite movies involve DC Comics super heroes. School is not his favorite place to be, but with consistent encouragement and support, he has the ability to excel academically. He aspires to go to college to achieve his dream of becoming a video game designer. Similar to most teens, Cody likes socializing with friends, listening to music, and going to amusement parks. He is interested in obtaining a job to make his own money and improve his independent living skills. Cody is excited about the possibility of being adopted and wants to be part of a family that is caring and values time spent together. He will do well with a family that demonstrates patience, structure, and guidance to help him reach his full potential.
Advertisements
Host: www2